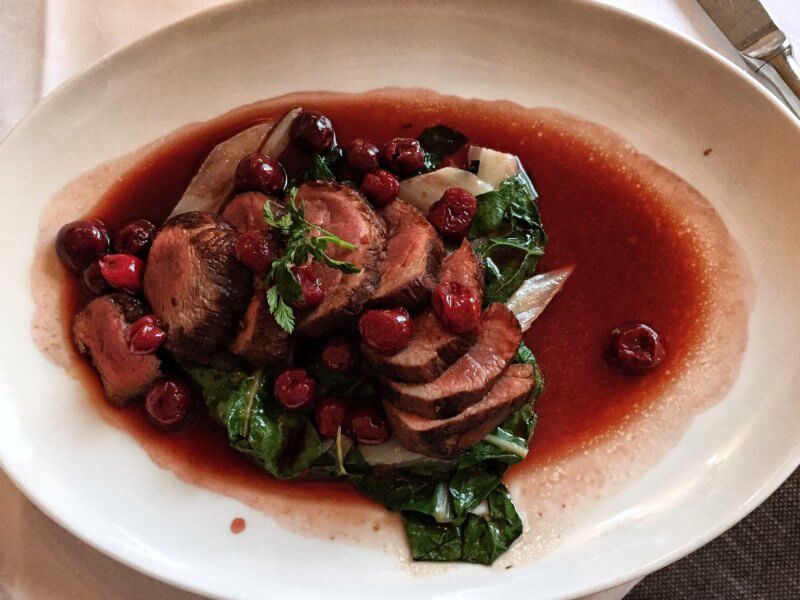 I generally try to avoid South Kensington as much as I can.  Despite the plethora of world-class museums in the area, it still manages to feel like bit of a soulless wasteland.  When I’m not being helplessly swept along by the tourist hoard, I’m aimlessly wandering around looking for a decent place to eat.  Somewhere that’s not a chain or life-ruiningly expensive.  So when my friend suggested we go to an exhibition at the V&A, I immediately went into panic mode.  A day out is just not complete without a bloody good lunch and there was no way we were going to end up in Carluccios.  Fortunately, I think I’ve managed to find the holy grail – an interesting, independent restaurant that isn’t going to break the bank.  Welcome to Ognisko.

Regular readers will know how much I like Polish food.  If there’s a menu that’s full of game, pork, some kind of fruity sauce, anything stodgy like dumplings, then I’m all over it.  Polish cuisine is a great big hug on a plate.  But it’s not really know for having much finesse, is it?  Well, Ognisko challenges this right from the outset.  It’s based in a beautiful townhouse at the north end of Exhibition Road.  Even the entrance alone whispers elegance and class.  In fact, it’s a club that was established in 1939 for the Polish community in Britain during World War II, which goes some way to explaining the rarefied feel, the warm yet deferential service. 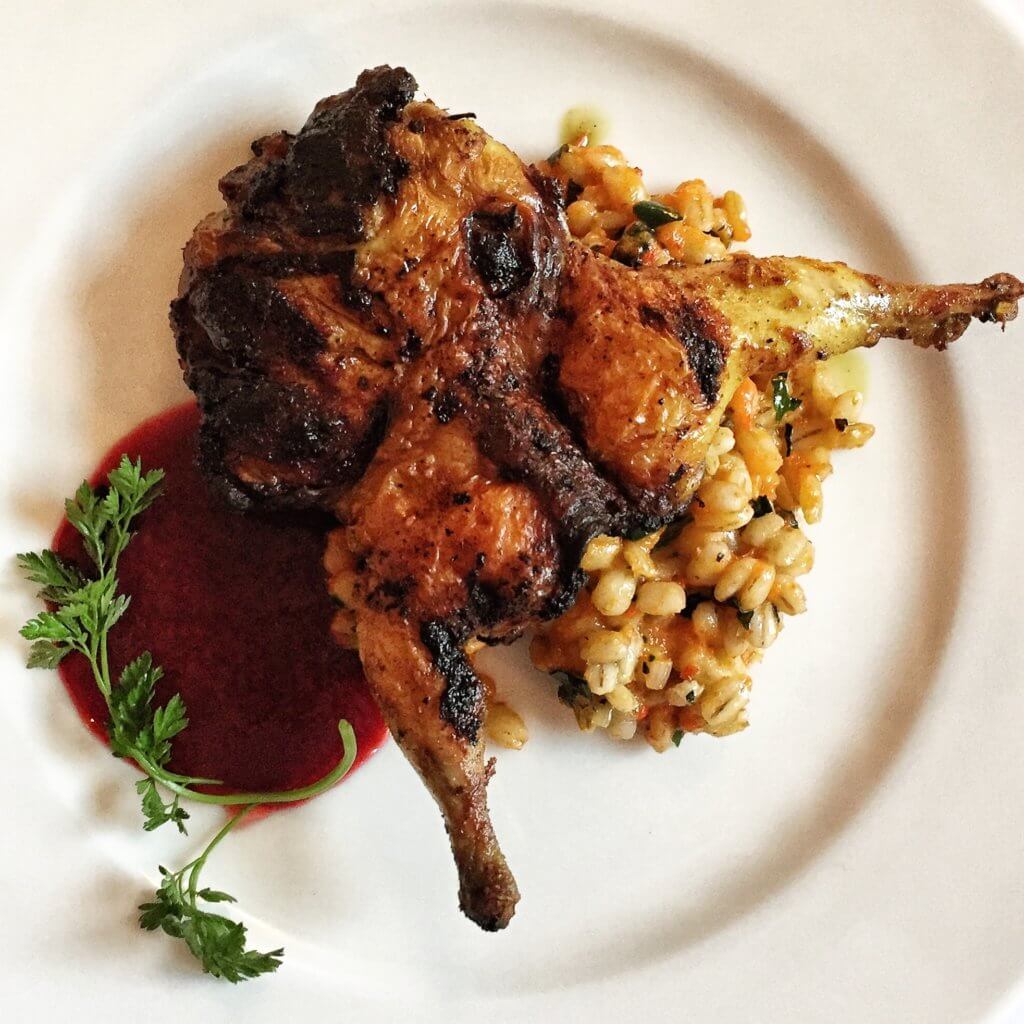 Deciding what to eat was so hard!!  There were so many delicious looking dishes on the menu, plus whole sections just for dumplings, blinis and potato pancakes!  Eventually I settled on a starter of roast quail with spiced pearl barley and plum chutney.  The quail was served whole and had been spatchcocked, so I could get plenty of meat off it.  The plum chutney wasn’t a “chutney” as I know it, i.e. something fairly rustic and chunky.  It was a smooth plum sauce, but I wasn’t complaining because it was delicious and really united the whole dish.  Even the pearl barley, which I generally find about as exciting as dust, was tasty and added a different texture to the plate.  My partner in crime chose the smoked eel with Russian salad and a horseradish and mustard dressing.  The presentation was incredibly dainty, and the salad was the perfect foil for the smokiness of the eel.

For my main course, I went for the game option again.  I’m just so predictable…  But how could I resist roast haunch of venison with swiss chard and cherry sauce?  While it may not have looked quite as pretty as the starters did, the fact that the venison was cooked to absolute perfection more than made up for aesthetics.  The meat had clearly just kissed the pan and so was dreamily tender.  And, in my opinion, there are few things more delicious than that sharp pop of berries in the same mouthful of rich meat.  The one negative element was the duck breast that my friend ordered.  It had been over-cooked to the point of ruination – grey, chewy and unappetising.  Duck that’s not pink is pretty unforgivable in my book. 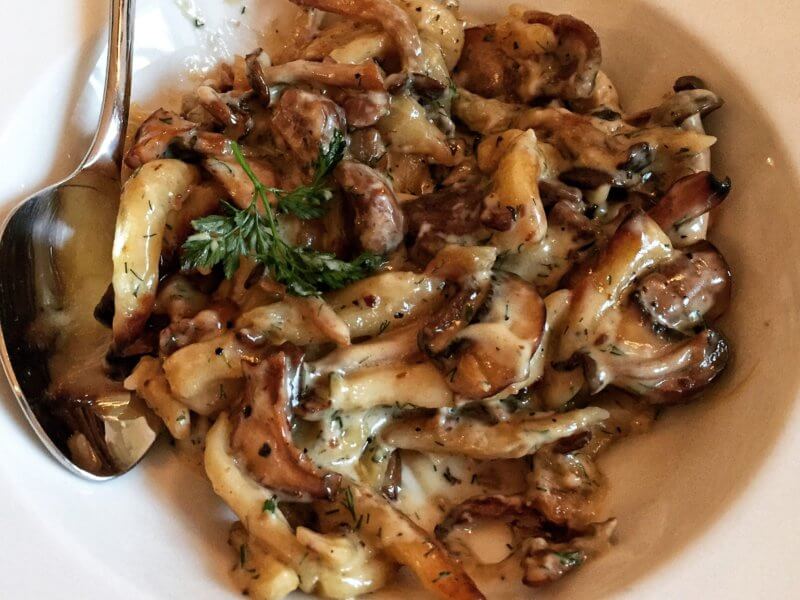 I feel that now is the right time to mention the dumplings.  Because, of course, we ordered dumplings on the side just like regular people would do.  Right?  We chose the fried kopytka dumplings with chestnuts and forest mushrooms.  I was expecting something like a few large crispy balls filled with mushrooms, but what we got actually resembled more of a pasta dish.  The dumplings were little strips of dough mixed into a creamy mushroom and chestnut sauce.  The sauce was absolutely stuffed with garlic and parsley; the smell of it alone was enough to make us drool.  Unsurprisingly, the dish was super-rich but we couldn’t stop eating it.  It was the gastronomic equivalent of crack cocaine.

The dessert selection looked pretty interesting; you could choose from the likes of caramelised spiced plums and Sliwowica flamed poached pear tart.  We were so full after all the dumplings and meat and stuff, that we decided to share a pudding.  Dietary requirements meant that we had to “make do” with a chocolate fondant.  Chocolate fondants are notoriously tricky to get right, as many a Masterchef contestant has demonstrated, but this one was bang on.  A torrent of chocolate sauce poured out from the middle, swirling into the vanilla ice cream and sour cherry compote that accompanied the fondant.  Delicious. 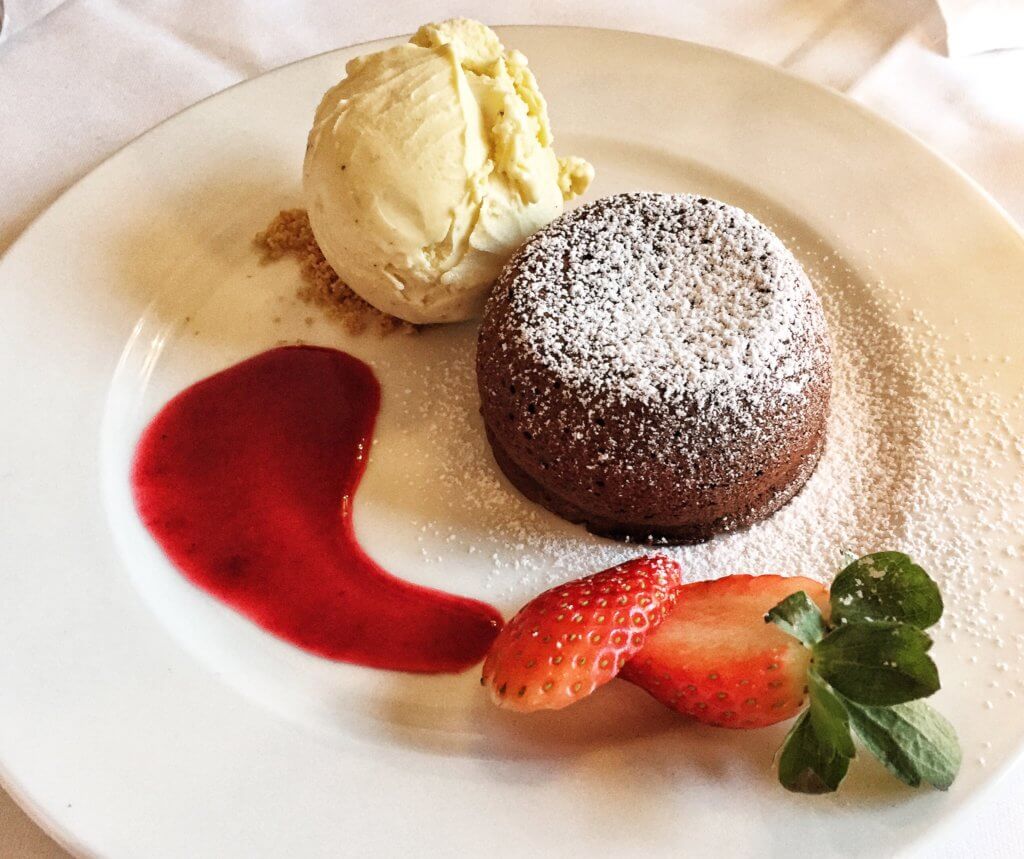 Ognisko was a real treat.  Not only because it’s always brilliant to discover a great “new” restaurant, especially in a part of town that so frequently disappoints, but also because it felt like the kind of place you visit for a bit of a splurge.  Everything from the elegant interior, the slick service and the sexy plating spoke of fine dining.  However, here’s the best bit, the prices didn’t.  Ognisko is pretty reasonably priced, with main courses in the region of £17-£19.  It’s also really close to all the museums, making it perfect for a day out.  Maybe there is hope for South Ken after all….?

Ognisko, 55 Princes Gate, Exhibition Road, SW7 2PG
I was lucky enough to have lunch bought for me as it was my birthday, so I don’t know exactly how much the bill was.  However, it was in the region of £80 for two people, including drinks.